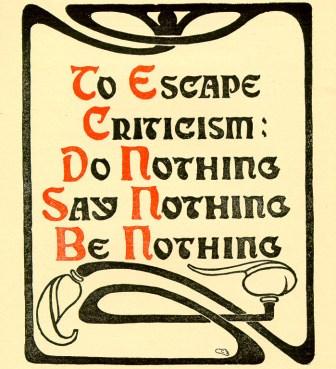 Receiving criticism isn’t an option. It often occurs when you’re most vulnerable, irritable, and discouraged. While you don’t have control over when and how you’ll be criticized, you have choices in how to respond. Some types of criticism carry more influence than others.

Critical to Be Cruel. We might think once we’re beyond junior high and high school, the mean kid stuff is going to stop, but it doesn’t. Some people hone their “mean” skills almost to an art form. They criticize you because they can. They want to see you squirm. We want to believe the best in everyone. Christians are supposed to be nice, right? We all have struggles, and chronic criticism tends to be some people’s main struggle throughout life. How should you respond? Acknowledge the person’s communication with you without accepting the burden of what she’s saying. That’s not to say you should completely ignore what’s being said. There might be a thread of truth from which you can learn and grow. Listen and sort through what is consistent with what others have said. Just because the way something is presented is ugly doesn’t mean there’s no truth somewhere within it.

Critical to Be in Control. Some criticism stems from a need for control. By being the “expert” about something, always having the best solution for every situation, people who criticize to be in control are similar to armchair quarterbacks and backseat drivers. They might appear to know it all, but in reality, they’re rarely willing to step in and actually do the hard stuff they’re telling you to do. Leadership is easier from the sidelines. How should you respond? Realize it’s not all about you when someone criticizes you. There are (at least) two people involved. While you need to consider your involvement in the situation, also consider the other person’s patterns and possible motivations. Be careful, because it can be easy to dismiss someone based on their past interactions with you and others.

Critical to Be You. Some criticism is rooted in jealousy. Whether or not you believe you’re jealous-worthy, there are people who see your responsibilities, opportunities, and relationships and believe what you have is better than what he has. People often don’t know how to appropriately handle jealousy. They know they shouldn’t be jealous. They don’t want to admit they’re jealous, so it begins to surface as anger, judgment, or avoidance. How should you respond? Telling someone she is jealous of you when receiving criticism isn’t going to be very helpful. In fact, you might not even be able to easily identify this type of criticism, because you can’t know someone’s motives. Listen with respect, and respond with affirming ways whenever possible to help others the worth God has given them.

Critical to Be Critical. Some people criticize for no other reason than they enjoy criticizing or have created such firm habits of criticism that it’s difficult to stop. Sometimes people who have been or are constantly criticized think criticism is the norm, so they perpetuate the cycle. How should you respond? Let the majority of this type of criticism roll off of you, but when the patterns continually impact you, you’ll need to speak up and try to develop new patterns.

Critical to Be Helpful. Now this is the kind we want! We’d like all criticism to be constructive. We’ve all learned lessons from people throughout our lives even when the advice or instruction has been difficult to hear and accept. The problem is we’ve often built up our defenses so much against the unhealthy and unhelpful types of criticism that we have a knee-jerk response when we encounter something constructive. We let our discerning muscles atrophy and throw all types of criticism out (or absorb it all much too easily). How should you respond? Despite the hurts you’ve experienced in the past, remain open to potentially helpful criticism. Intentionally invest in people you can respect and trust. When criticized, ask yourself, “Can accepting and applying this criticism help me grow in God-honoring ways? Is it consistent with God’s instruction?”

God will often use people in your life to confirm God’s direction for your life. While you should always respond to individuals with respect, you don‘t have to absorb every person’s opinion of you. Learn to discern among various types of criticism. Keep criticism in perspective and let God grow you through it.