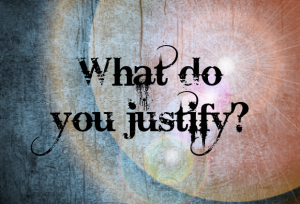 It seems that Dinah’s brothers were justified in their attack of Shechem, Hamor, and their people. Shechem had defiled Dinah, so her brothers Simeon and Levi hatched and executed a plan that…well, executed all the able-bodied men in the community so that they couldn’t fight back. Jacob rebuked them because of the trouble they brought on the family, now with a target on their backs after just having made an agreement to live peacefully with Hamor’s people. But Simeon and Levi excused themselves by asking, “Should (Simeon) have treated our sister like a prostitute?” (Genesis 34:31)

They thought they were justified. Were they? If so, what does that say about Jacob’s rebuke? Is his concern justified, or does Simeon and Levi’s justification cancel out the possibility that Jacob could also be justified. Could they both be right? Could they both be wrong? Were there other paths they could have taken?

Should a county clerk quit her job because she is opposed to some of her responsibilities, or should she go to jail? Can either or both responses be justified?

Should a transgendered student have his or her way, or is other students’ discomfort important, too? Whose rights prevail? Can one or more responses be justified?

Should I fight and defend something or someone, or should I walk away? Can I justify either response? Is justification my goal or is truth, righteousness, and faithfulness my goal?

We can justify just about anything. We all have limits of when we claim what someone else is justifying isn’t actually justifiable. But we don’t have to justify our own actions or thoughts. In fact, we don’t really have to power to do so. That’s God’s job. Only He has the right perspective. We might think we’re doing a really great job at assuming and projecting His perspective–so much so that we’re willing to beat someone else over the head with it. But are we willing to ask someone questions, listen, understand, and build a relationship? The more we lump together people, the more people get harmed.

After all, Shechem was the one who defiled Dinah, not all the others who were killed the same night for the same reason.

Know and respond to truth, not your opinions or assumptions. Refuse to justify. Give that job to God. You have enough on your plate simply knowing Him and being faithful.