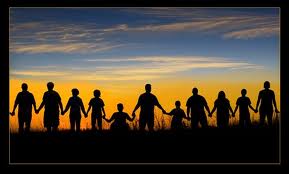 Jesus is certain in the importance of unity. When the Pharisees confront him about the source of his power over demons, assuming he could only be a follower of Beelzebub, who they believed to be the ruler of demons, he declares,

Every kingdom that is divided against itself will be destroyed. And any city or family that is divided against itself will not continue. And if Satan forces out himself, then Satan is divided against himself, and his kingdom will not continue. You say that I use the power of Beelzebul to force out demons. If that is true, then what power do your people use to force out demons? So they will be your judges. But if I use the power of God’s Spirit to force out demons, then the kingdom of God has come to you. If anyone wants to enter a strong person’s house and steal his things, he must first tie up the strong person. Then he can steal the things from the house.Whoever is not with me is against me. Whoever does not work with me is working against me. (Matthew 12:25-30)

Jesus refutes the Pharisees’ accusation that he is doing the devil’s work by pointing out that if the devil is allowing Jesus to do his work for him, the devil is actually undermining his own work. Jesus performed many miracles, many which had nothing to do with demons. Plus, Jesus gave all glory to God and took none for himself; he actually instructed people whom he helped to keep the situation quiet on many occasions. Humility is definitely not the way of the devil. He will take all the glory he can get.

Also, Jesus asks the Pharisees who is guiding them to cast out demons. Who is their authority? Of course, they are confident they are guided by God. So, they are condemning Jesus for something they do themselves.

The bottom line is the Pharisees don’t understand. They trust the inwardly-focused community they’ve built for themselves, and as long as they remain vehemently united, they believe they are right. But just because we stand together doesn’t mean we will stand for long.

Only those who stand with Jesus with stand for long. It’s not a self-centered stance. It’s not a stance of superiority. It’s a stance on truth and in trust. And Jesus prefers that everyone stands with him. Each of us has a choice to believe him. We also have to the choice to ignore, refuse, or condemn him.

What are you choosing today?

How do you handle what you do not understand about God, Jesus, the Holy Spirit, and God’s Word?