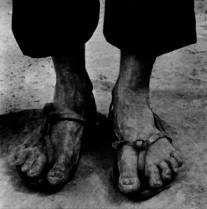 So during the meal Jesus stood up and took off his outer clothing. Taking a towel, he wrapped it around his waist. Then he poured water into a bowl and began to wash the followers’ feet, drying them with the towel that was wrapped around him. John 13:4-5

Jesus used water to cleanse others. It shouldn’t have surprised anyone who believed he was the Messiah. After all, he came as the living water, giving eternal life to all who believed. People could take all their sins to him, and he would redeem them. If there was anything he knew, it was other people’s dirt. Washing feet didn’t come close to the dirt he encountered spiritually.

But washing the followers’ feet was different than washing their spiritual feats. This was real dirt on real feet. It was tangible filth and ugliness, and here was the Son of God stooping to wash the feet of those who served him with his very own hands. He proceeded to dry them with the towel he was wearing around himself. He wore their filth.

Jesus washes your filth. He wears it no more. All the filth of the world hung with him on the cross and died with him. When he rose from the dead, there was no more filth. Death was defeated, and as a result, you have the promise of eternal life. Yes, there is still sin in the world. Yes, we’re still messy people, but Jesus already took care of the sinful mess. All we have to do is recognize and accept who he is and what he’s done, and we are clean. We won’t always feel clean, and we need to stay in relationship with him to work through the many issues we have with our uncleanliness, but we are forgiven. We now get to move on and deal with our baggage.

Just as Jesus washes our feet, we have the opportunity to share his love and mercy by washing others’ feet. We might not wash literal feet – although it is a very moving experience to be able to serve people in such a way – but we need to stoop to serve others. We need to place ourselves in a sacrificial position in order to give someone else our time, efforts, compassion, gifts, and resources.

When has someone’s sacrifice impacted your life?

When has your own sacrifice impacted someone else’s life?

Live It. Wash someone’s feet today. It may or may not be literal foot-washing, but look for an opportunity to help someone. God will not withhold the opportunity to serve him by serving others.

2 thoughts on “Wash Their Feet”