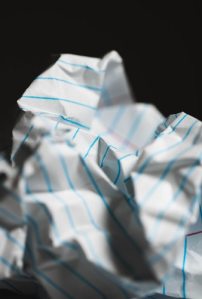 I watched a sitcom in which the parents were struggling with challenges with each of their three kids and the dog. They decided to put all four names in a hat and take turns drawing a name. Each parent would deal with the problems of the two kids/dog they pulled out of the hat. The wife drew a name and announced it. The husband drew a name and announced it. The wife drew a second name, looked at it, frowned, then dropped it and declared foul and do-over. When she picked out the same name the second time, she just tossed it at her husband and declared she wasn’t handling that issue.

It was funny within the context of the sitcom, but it also made me consider how often we take a similar approach with God. We accept some of the things we seem to pull out of the hat, things right in front of us that we need to deal with and handle with choices of faith, responsibility, humility, etc. But sometimes we end up with something in our hand that we want to crumple up and toss  aside, declaring foul and do-over. We try to hand back to God what we’d prefer to avoid, even when he knows the best timing of the lessons we need to learn and the challenges we can face well with him.

Of course, what we face in life isn’t as random as pulling something out of a hat, God is much more purposeful than that. But just because he’s purposeful doesn’t mean we understand or like the purpose set before us. Even when we trust he is equipping us to face what is before us, we don’t always whole-heartedly embrace it. There is still uncertainty and discomfort. The reaction to recoil from something isn’t the issue as much as what we do with that reaction. Do we let it drive us and step away with avoidance and fear, or do we pause long enough to let God give us the wisdom and courage to take the next step with him?