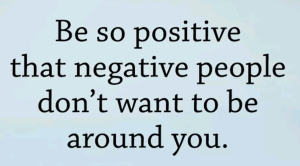 As I began this post, my keyboard’s space bar failed. For a writer, that’s not a good thing. I Googled a fix and tried a few options. They didn’t work. I resorted to the ever-faithful reboot. I accessed the saved draft and experienced the same issue. But I opened up another app, and the spacebar worked fine. So, I deleted the draft and began again with no issue.

I wasn’t feeling as positive as I had when I started, but I laughed at the irony.

I don’t think we can put a bandage on things and pretend everything is okay, so when I encourage positivity, it is only in an authentic context. We need to be realistic, but we can all admit to seeing general bends of positivity and negativity in people around us. Two people can experience something similar and have divergent responses.

But it goes beyond the people who are chronically negative. Some people are selectively negative. But they are consistent in their selectivity. They can’t imagine a relationship, job, or finances working out, but they are sure a different relationship, job, or financial situation will be exceptional because “this” won’t be a problem or “that” will be the help they need.

I don’t raise this alert to point fingers. I bring it up so that we can all consider our patterns. How do we approach issues, confrontation, and dilemmas? How do we rationalize or take responsibility for our choices? How do we encourage or discourage others?

Know your bend. Then grow in the right direction.