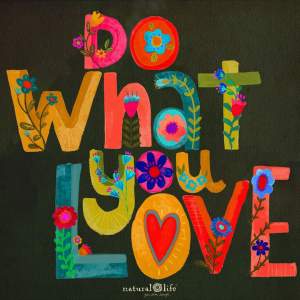 I don’t like this phrase: Do what you love.

Yes, I want to encourage people to explore their passions, consider their gifts, persevere toward goals. But, guess what? Some people love some really dysfunctional stuff. And I’m not just referring to criminal behavior. I’m thinking about unhealthy stuff that hurts others.

Even if the unhealthy stuff hurts the person more than anyone else, it hurts one person too many. And you know, our lives have ripple effects. Even the stuff we don’t think impacts anyone else does. We don’t live in isolation.

It’s like the phrase, “I just want you to be happy.” I get why we say it, but I think it gives those we love the wrong idea, as if everything is supposed to go their way. We’ve let pride seep into our lives—a pride that tells us we should have more, we deserve better, we can have what we want. It’s not only not true, but it comes at a high price. In our pursuit of what we deserve and want, we leave relationships in tatters, we deceive ourselves and others as we rationalize behavior, and we create something that might look good on the outside but is crumbling underneath.

As long as what we love integrity and encourage each other toward it, I say, “Do what you love.”