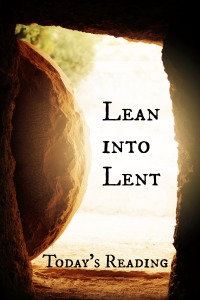 Lent is a preparation, a spiritually-disciplined journey, a purposeful reflection on Jesus Christ.

They led Jesus away to the high priest, and all the chief priests, the elders, and the scribes convened. Peter followed Him at a distance, right into the high priest’s courtyard. He was sitting with the temple police,warming himself by the fire.

Then the high priest stood up before them all and questioned Jesus, “Don’t You have an answer to what these men are testifying against You?” But He kept silent and did not answer anything. Again the high priest questioned Him, “Are You the Messiah, the Son of the Blessed One?”

“I am,” said Jesus, “and all of you will see the Son of Man seated at the right hand of the Power and coming with the clouds of heaven.”

Then the high priest tore his robes and said, “Why do we still need witnesses? You have heard the blasphemy! What is your decision?”

And they all condemned Him to be deserving of death. Then some began to spit on Him, to blindfold Him, and to beat Him, saying, “Prophesy!” The temple police also took Him and slapped Him. (Mark 14:53-65)